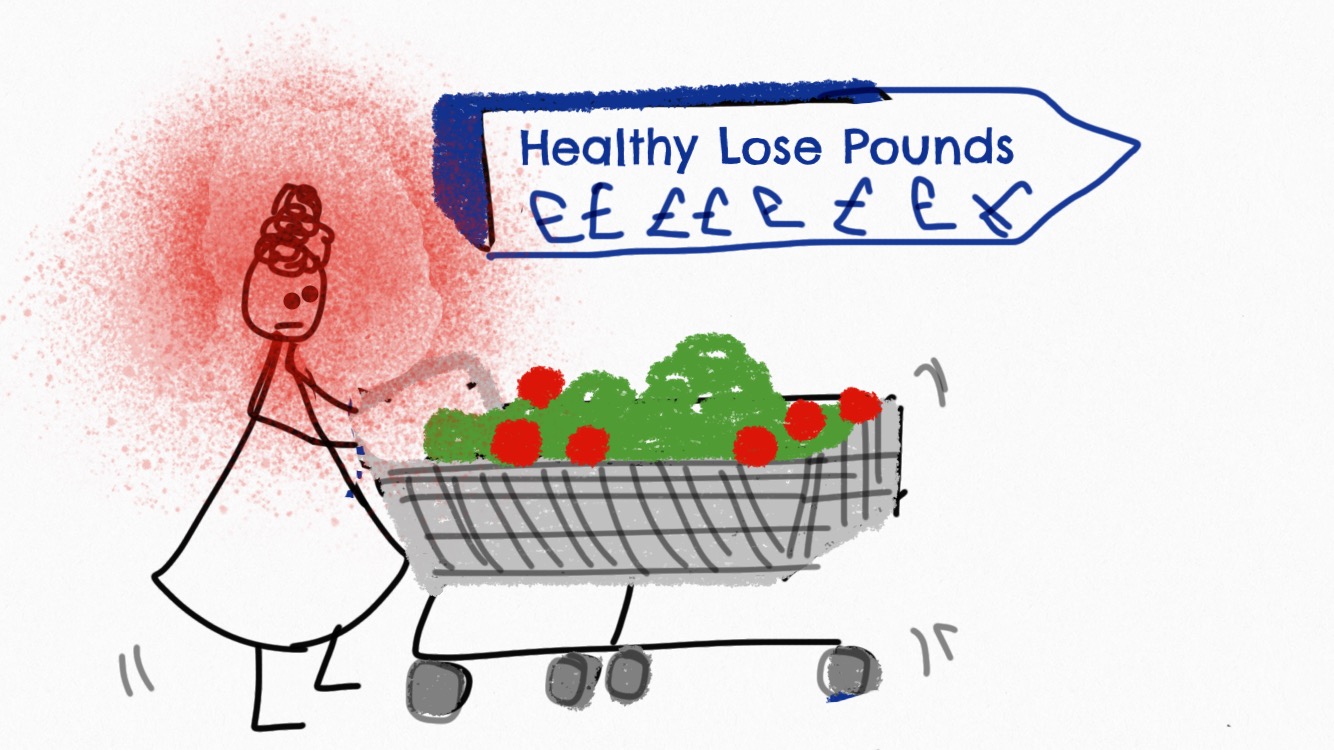 “A very attractive lady came to the notice of our Security Guard, Diligent David when cameras picked up movement in the usually quiet healthy aisle, normally frequented by only the cleaners keeping the dust at bay.

Due to this unusual activity, Diligent David kept the lady under his watchful eye.  A little while later she made a move, astonishingly rather than leave the aisle she started adding items to an already crowded trolley of green things & tomatoes.

Using his initiative, Diligent David radioed through to Checkout Charlie to ask her to open another till as a mega full trolley would be heading her way. We pride ourselves on long short queuing times.  Unfortunately, she was on her fag tea break”.

One shopper told the Daily Grief the mystery woman was Mummy Buck, a former 80’s chick.  “I’d know her anywhere”.  She said, “I’m a massive fan of her problem page“.

She recalled how she heard her talking loudly on the phone:

“no, I know, alright I get the message, I won’t go buying any of those bars, I know they’re a waste of money’ before carrying on to, well……… buy those bars!

Tracking Mummy Buck, a former 80’s chick down on a rare day off, she welcomed us in where she began to relay her version of events.

THE DECISION TO GO EXPENSIVE HEALTHY

“It’s a bloody nightmare she said, Dippy, 15 nearly 16 has decided to go all healthy!  He came in puffing his chest out and announced he no longer wants anything fried, anything in breadcrumbs or pastry.  He’s basically ruled out the whole of our bloody freezer contents.

Added to which, he said he ‘quite fancies those protein shakes and bars’ so could I get him a load.

To top it all, he even had the cheek to ask for homecooked, healthy dinners.  Like I have the time to find different recipes that can be cooked in under 10 minutes every day, with a handful of ingredients that maybe, just maybe I might have in my cupboard.

Is there even such a recipe”?

Defending his decision, Dippy 15 nearly 16, said: ‘You’d think she’d be pleased, it wasn’t long ago she was always nagging on about how I never stop eating crap blah blah blah and can’t I eat something healthy.

Now she’s like “cant you just have a bloody steak bake? I’ll put a salad with it”!

X-Factor reject turned author Steve Coiningit – Lettuce 50 Ways in under 10 Minutes, told the Daily Grief: ‘It’s a tough one.  Shelves are bursting with healthy recipe books and complicated recipes, the sole reason behind why I wrote this book. 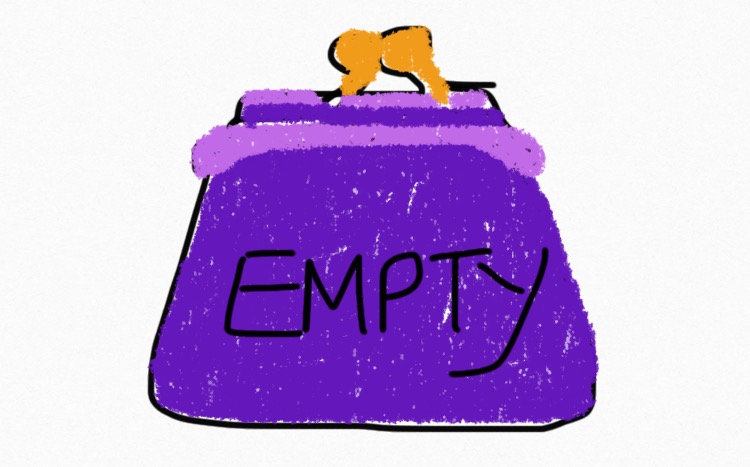 No cooking involved, healthy and full of useless info secrets.  It’s like no other book on the market, it’s fresh, exciting, so inviting.

I’d love to see what this fella eats for his dinner. I bet it doesn’t consist of anything green.  He’s probably like that Jamie Oliver, doesn’t give a shit, it’s just profitable to slate chicken nuggets especially school dinners that’s a sure-fire winner to make the BBC News.

Did someone recently say his restaurants were nose diving?  ‘

Not everyone has the luxury of staying at home all day cooking up a storm in the kitchen without getting it out of a box.

Sources close to the family revealed after a particularly long journey home from school, an unusually quiet Dippy was still chewing on a protein bar as they pulled up onto the drive.  It was so dense he thought he might not need to eat for a week. 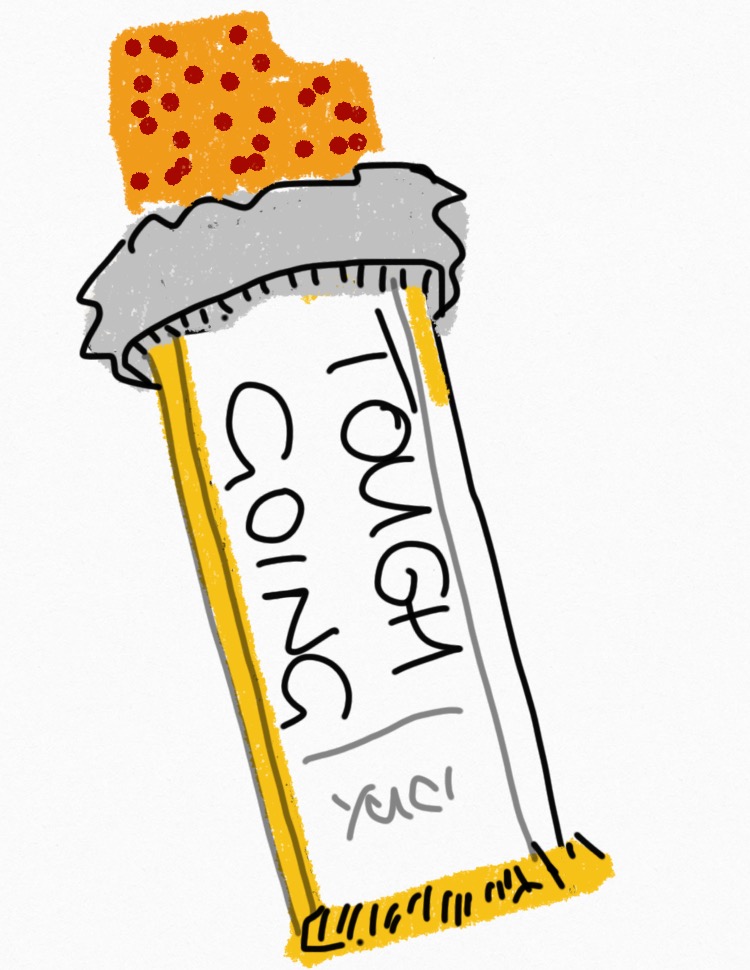 Exhausted and barely able to speak from chewing the bar for so long, Dippy 15 nearly 16, whispered to Mummy Buck, a former 80’s chick how he hoped she hadn’t bought any more of in that flavour.

Mummy Buck a former 80’s chick, was heard shrieking ‘for Christ sakes I’ve just bought a bloody load of them, you promised after I checked one million times, you’d definitely eat them.

You better not mention this to Daddy Buck, Chelsea’s No. 1 fan’.

Enjoying a crispy steak bake, Pippy 17, a new driver was keen to point out “I think it’s a great idea Dippy 15, nearly 16 has gone all healthy.

Not because I’m bothered about his healthy regime, I know if I fancy a steak bake there’ll actually be one in the freezer rather than an empty box”.

TO GYM OR NOT TO GYM

“Of course healthy eating goes hand in hand with the trendy gym.  The muggins I am, was paying a monthly subscription for him so he could turn up if he, well if he fancied it.

The trouble was he never seemed to fancy it, until, unbeknown to him I cancelled it, naturally he then fancied it the very next day.

I never let on.  I took the gamble he would find an excuse not to go, luckily my gamble paid off, I was right”.

However, I’ve since informed him the membership is cancelled.  He had two options use the ‘gym’ down our local park or use the one at school.

He’s now a member of the free school gym.

MUMMY BUCK’S TOP TIP FOR PARENTS GOING THROUGH THIS ORDEAL