Home » Mums out on the town chillin’ 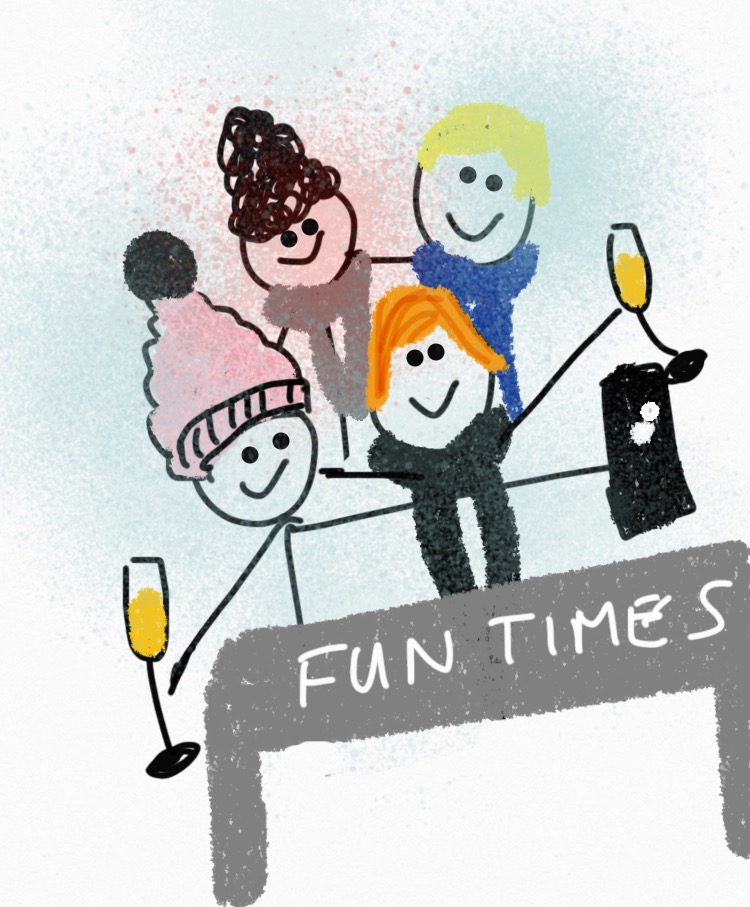 Mums out on the town chillin’ in freezing temperatures likened to teenagers with no coats says: Age is just a number author Nu Nees.

Reports are coming in from around the country concerning snowfall and freezing temperatures.  People are being told to stay indoors and keep warm.

In particular, over in the posh part of Surrey local newspaper have reported how calls came in concerned about 4 women who had been seen sat  braving the elements OUTSIDE on a Saturday night at a local pub.

Witness & X-factor hopeful Ben-e-Dict told the Daily Grief: ‘It was cold, really cold. Imagine sitting outside with your mates, drinking, chatting and laughing nothing wrong with that but imagine it being sub-zero temperatures? Total madness. 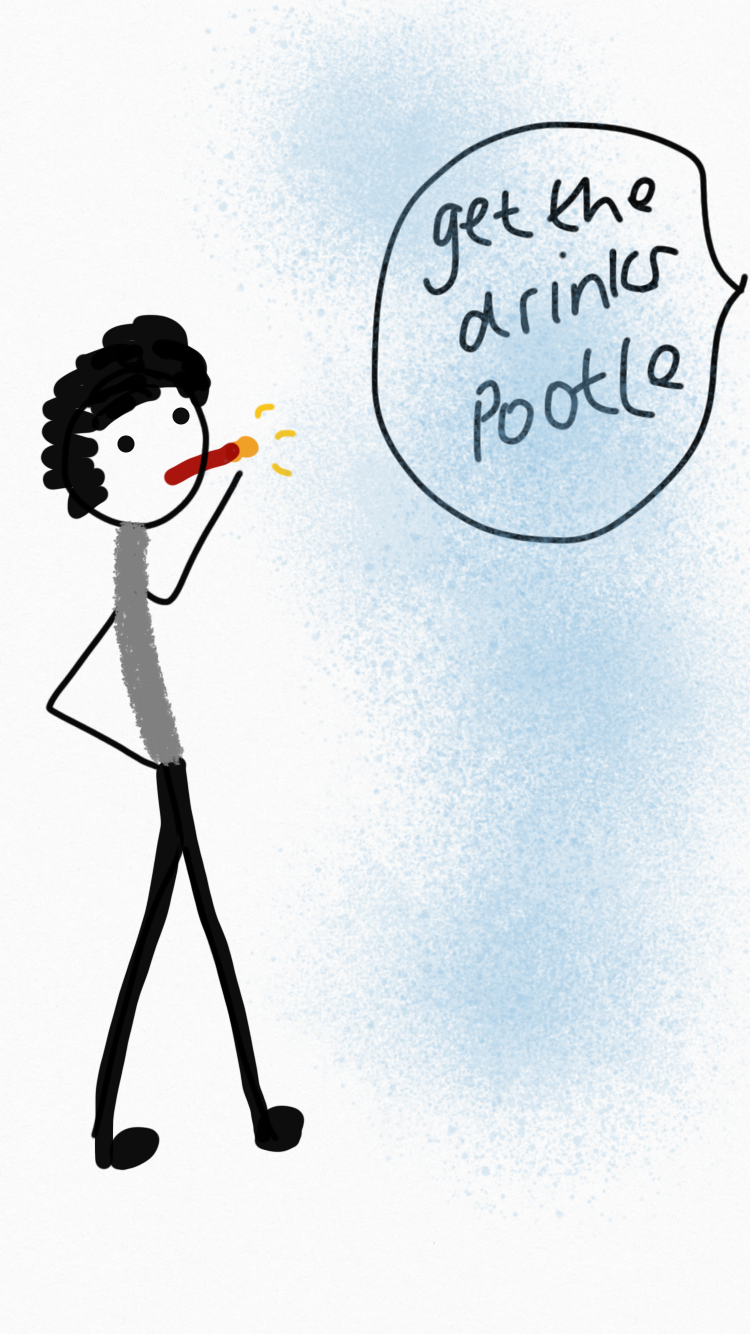 I was outside having a smoke observing the one table occupied by 4 women when one of them began randomly waving her arm around in mid-air.

I thought she was trying to shake some life back into her frozen arm until I noticed she had a phone in her hand.

It when then when I realised, she was just trying to get the angle right for a few selfies.  You should have heard them, it was comical ‘Good God, will you look at my chins’ and ‘fucks sake you better not post that one’.

Shortly after, I saw the same woman whip out a beanie hat adorned with sparkly bits and watched as she pulled it down so tight over her ears she almost disappeared under it’. 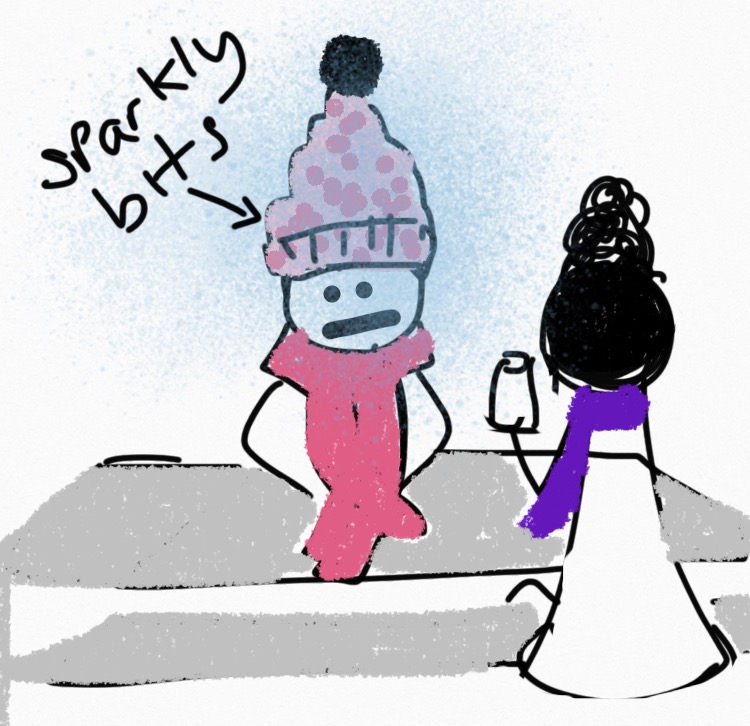 Ben-e-Dict recalled how he heard one of them shout out ‘Pootle’ to one who was wearing a brightly coloured beanie hat.  ‘I remember thinking it had been a long time since I had seen an episode of the ‘Flumps’.

Another witness Lou King who’d been sat inside the pub, recalled how she glanced out the frosted window to see 4 women huddled together trying to keep warm.

I watched as other people went outside only to come straight back in, making motions that indicated it was freezing out there.  Yet this group of women remained seated.

As the evening wore on, I noticed one get up and thrown down some robotic moves, which my husband pointed out was probably just frozen stiff joints, before she disappeared to later return with a couple of large, tartan fleecy blankets, which they wrapped around their legs.

The woman sat nearest the heater left her arm exposed.  It amused me how every 3 minutes as if on automatic, her arm would shoot out like a Jack-in-a-box switching the heater back on every time it went off.

Keen to know more about these hardcore women. We managed to track down one of the ladies in question who coincidentally turned out to be none other than our very own former 80’s chick, Mummy Buck.

Mummy Buck tell us, what took you to sit outside on a cold February night?

Well, it all started when my friend rang to book a table at our *favourite haunt   only to be told there were no available tables inside. 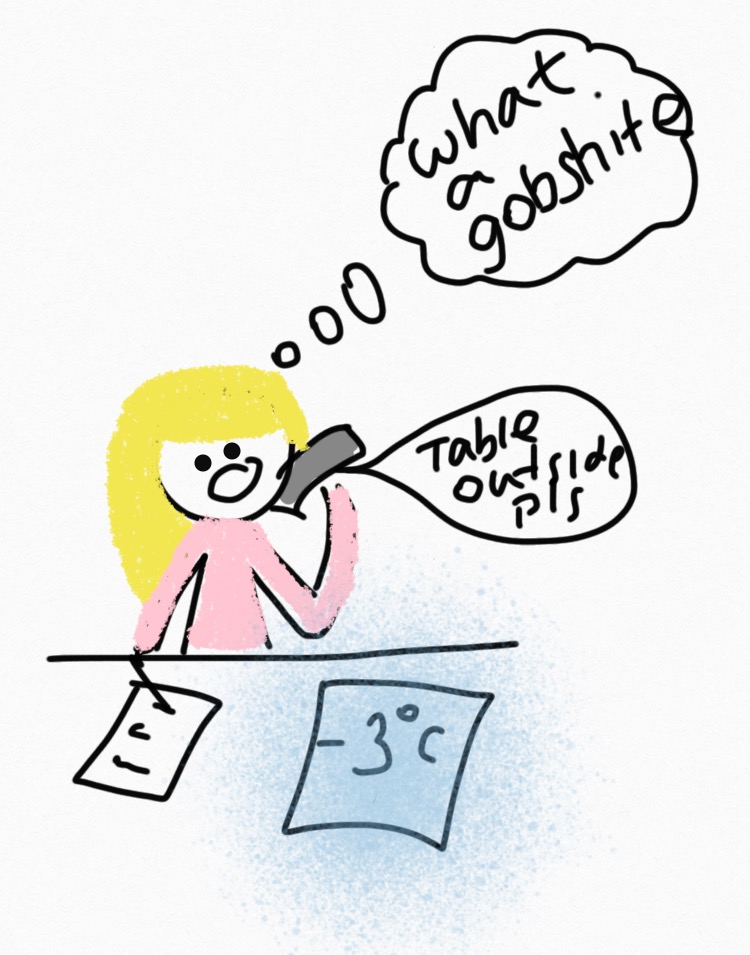 The only available tables were outside. She took the bold decision to book a table outside.

We weren’t deterred.  After all, you can’t get more hardcore than us we’re all mothers!!  It would take more than a cold night to knock us off our perches!  (See below *deluded).

Did you Mums stay all night chillin’ at the same pub?

I suppose you could say we were frozen to the spot.  Long periods of sitting in one place often leaves us manipulating our seized up muscles back to wanting to move.  Factor in the cold and its safe to stay where you are (see below *first world problems for the over 40’s).

I remember needing the toilet yet when I tried to get up, my body rejected this thought and my arse staged a sit-in. Not often I say, thank god for Tenas!

I knew if I tried again, the likelihood of falling arse over tit was real.  That happening would only send a false message to others that I was pissed which would have been totally incorrect (see below *not pissed on those prices).

It wasn’t just the weather that caused my body to freeze that night.  The first time it happened was shortly after arriving.

I vaguely remember the barman asking for a month’s wages in exchange for a bottle of wine. It was at that point I felt a cold hand clutching at my heart.  I froze with shock at the price (see below *2nd mortgage). 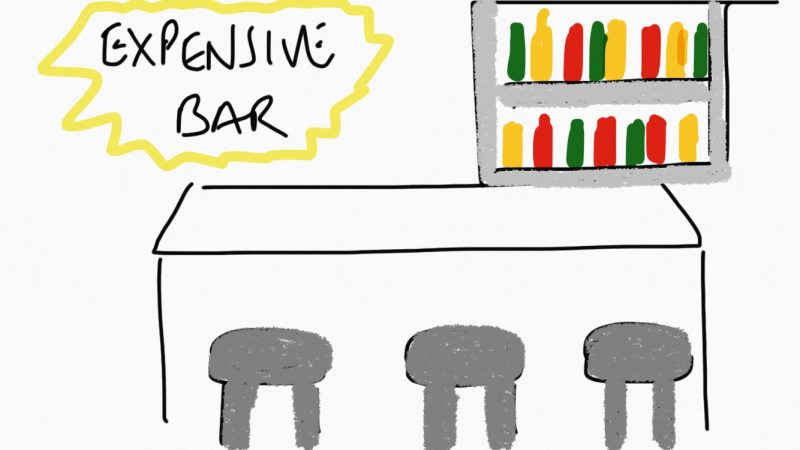 Fortunately, my friends were on hand to bring me back round.  I felt a warm glow as they reassured me this round was on them!

‘Remember’ they said: ‘you’re on the coke, you’re driving. We’ll get your drinks’.  The relief was immense.  I felt a sudden surge of love for my friends at that point.

Tell us Mummy Buck, how much effort goes into a ‘mums’ night out?

It depends what our plans are.  If its a night in then its easy, no effort required.  If we are out on the town then effort is required which is why its not often we venture into our local town.

How do you prepare for a night out and what does it usually involve?

Preparation is key to any girl’s night out.

MY preparation starts early.  Not because I have a long beauty routine.  No its long because I spend time screeching and searching for an essential item that has been removed and not returned to my makeup box (see below *light-fingered teenage daughter).

‘so easy even a baby could do it’

which I follow to the letter hoping to get that front-page Vogue look, making my eyes ‘pop’ with smokiness.

In my mind, the end result is exactly as YouTube.  In reality, no matter how hard I try all I see when I look in the mirror is the face of an extra from the Walking Dead, furthermore one who’s clearly having a bad day.  Cemented when one of my kids will burst into the room shouting ‘whoa Mum what’s wrong with your eyes’?

What the hell to wear.

And so, what to wear? The arse ache is real, it doesn’t matter whether I’m going to pick the kids up, down the pub, round friends, well maybe not round friends as that’s just trackies, but it’s a nightmare deciding what to wear.

Work clothes are a complete no, no, they’re ONLY for work. The thought of a work colleague seeing me on any social media platform wearing a work top brings me out in a sweat greater than a ‘menopausal moment’ does.

So its a toss-up whether to play it safe with the anywhere top or go for it and wear something daring with lots of bold colour or flowers leaving you feeling way overdressed all night at the pub!

As soon as I shut the front door behind me my inner teenager surfaces and I wheel spin off into the distance to pick up friends.  Regretting my choice of attire the minute I lock eyes with their outfits.

It’s follow my leader into the pub where we make a bee line to the bar, while one hangs back to go find our reserved table. 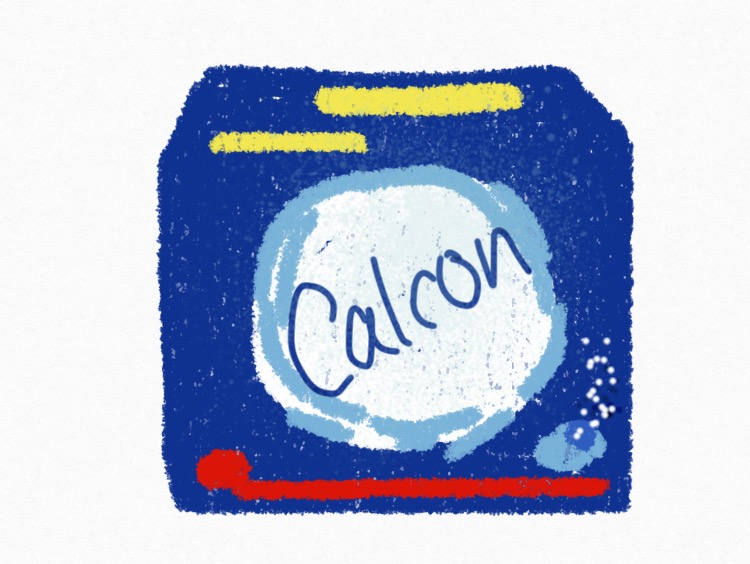 Gone are conversations ‘yeah let’s get totally pissed’, ‘what club shall we go to next week’ replaced with ‘shit, do you find your body aches when you get up’, ‘yeah I think I’ve hit the menopause now’ and how everything seems to take longer to recover from.

It takes me all my time not to be a moany old witch and repeatedly drop into conversation how many bottles of wine you can get in Tesco for the price of the bottle they just bought.

No night is complete without a selfie and ‘check in’ on Facebook showing everyone us Mums know how to ‘rock nights out’ and what a bloody fun lot we all are.

thanks ladies for last night, had SUCH a laugh

that done you can relax, spending the rest of the day checking Facebook to see who’s ‘liked’ your status, more importantly, who hasnt! making a mental note to return the favour on their next post……..*unfollow*.