Christmas marks the beginning of my second favourite F word, fibbing.  This F word is batted around sparingly in the months leading up to December, but as soon as we hit the festive period the start of 24 nights of fibs start to roll of the tongue, and boy do I marvel at how good I am at this.

Writing this I can almost hear the gasps of disapproval ringing around me, but quite honestly I’m blinkered to the echoes of how wrong someone else may see it, as much as I’m blinkered to my OH telling me I’m useless at parking, I don’t care.

Coming from an Irish family story telling is in my blood.  I grew up listening to stories, some real, some fibs although I’m still not quite sure which were which, but I enjoyed them all.

One I know to be an actual fib was about a strange man aka Father Christmas, who would come into our house every year on the 24th night of December and leave presents for both me and my brother.  Sounds good doesn’t it, but alas this fib doesn’t sit well with everyone, it seems that by my parents fibbing I, along with my brother, should now have trust issues with my parents, as this line of fibbing can leave us questioning the words that roll out of their mouths.

Wow if this is the case I cannot believe I didn’t end up being carted off in a strait jacket to the nearest asylum as this wasn’t the only fib I got told growing up, I grew up believing fairies, leprechaun’s and banshees all existed, and spent many a night on holiday in Dublin praying the Banshee wouldn’t turn up on the window ledge to belt out a wailer of a tune,  and not only that, my mum told my friends these whoppers when they used to come over, oh the shame!!!

So here I am a survivor of the fibs, sane (well almost!) and ready to spill some of the fibs spun in our house over Christmas.

Christmas in our house starts with the hubbies ceremonial, grunting & groaning during the untangling of lights.  Checking out the neighbourhood competition usually calls for my husband’s favourite F word and a quick trip to the shop for a few new sets to thrown around the bushes artistically, although this year we seemed to have missed the memo that our neighbours got about the all new snowflake projectors in town!

And with a few more of my hubbies preferred F words I put it on the ‘must buy in the sales list’ and file it away in the black hole section of our filing cabinet.

Inside doesn’t escape the twinkly lights, but this is my domain and I like to keep it more grown up and sophisticated, with villages a glowing, peppermint cane candles burning, snowmen blinkering, National Grid rubbing their hands, we are ready to rock ‘n’ roll, of course the downside to this is

b) who’s turn it is to spend the 20 minutes or so turning them off, fortunately I always seem to have other pressing matters at ‘lights out time’!

Christmas is about remembering to put out chocolates for the kids every night, not from us but from the chocolate fairies, and hoping that hubbie remembered to replenish stocks that day but stupidly waiting until the twilight hour to check this fact!  Even the Quality Street tub can’t save the day when hubbie forgot since it contains nothing but empty wrappers.  It’s at these times I prefer his favourite F word and spend the night planning my missing chocolate fib to tell the kids next morning.

Christmas is about battling through shops with a list left at home, and wishing it was like the ‘list’ I asked my mum to write for her present ideas, a one item list, a book, a book that when I went to buy was told it wasn’t out until April next year!  Christmas is also about convincing the kids that the present I have actually ended up buying due to Argos being out of stock, is really a better alternative to what they really want!

But most importantly Christmas is about setting the stage for the biggest night of all, the visit from Father Christmas. 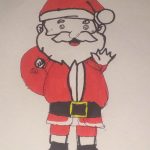 Cue the FC Video, watching the kids in turn listen to FC using my second favourite F word telling them how good they have been, all year! And stifling my giggle as he reels off what is required of them to do, all carefully crafted by my good self.  Then sit back and listen to the echoes of my youngest son threatening that he will try to do his homework in good time.

Some from the club of ‘we don’t lie to our kids, ever’  have even been documented as saying it’s like a form of control getting kids to do what we want by fibbing they could end up on the naughty list if they don’t.  I agree it is a control thing and one I love to milk, this is the only time of year that practically anything I ask of them will be done pretty much first time and without resistance, and all at the mere mention of “remember who’s watching”!  The other 341 days are usually spent arguing my case!  I welcome this break with open arms.

Not only do we fib to our kids, we have now even enrolled my eldest two into continuing this fib, yes you read that right!  I even go that one step further and leave proof he has ‘been’.  He leaves his snowy footprints through the hall right up to the bedroom where all 4 of them share the same room, argument free, for this one night only.

His reindeers even leave their sparkly take off trail on our front lawn, and it’s not that mad woman who looks like she’s sprinkling grass seeds in the early hours doing it.

Stories, fibs whatever you want to call them are told every day by many people,  yet it’s this one story that seems to stir up a fuss.  In years gone by, men would gather on street corners in Dublin to tell many a tale, and one such tale an Uncle told me as a kid which I remember to this day.

With his Irish eyes a smiling, rosy cheeks a glowing and Irish voice a telling the story goes that many years ago a war was being fought deep in the Jungle, whilst running from the enemy a young soldier heard the faint cries of a distressed animal, troubled by the sound he ignored the danger behind him and followed the cries.  It led him into an opening where he found a baby elephant trapped, not wanting to leave him he freed him from the trap, gave him a pat on his arse and off the baby ran.

Many years passed and the young soldier now a man made his way to the Circus that was in town.  Sitting right at the back in the only seat he could afford him patiently waited for the acts to begin.  First on were the elephants, as he watched them enter the big top, he noticed that one suddenly stopped, turned and looked straight up at him.  Next thing he knew he was being whisked out of his seat by a large grey trunk and taken and plonked in a seat right at the front of the tent, and with a wink from the elephant the show began all apparently proving that elephants never forget.

Like that elephant I do not, and have not forgot all my wonderful childhood memories adorned with magical fibs of Father Christmas, Fairies, Leprechaun’s, and tales that I could sing!  And if I can be just half of what my parents are like then I know I have made it as a parent, and hope like me, my kids all grow up looking back on their childhood the same way I do and instead of having any such trust issues they just have fuzzy warm feelings.