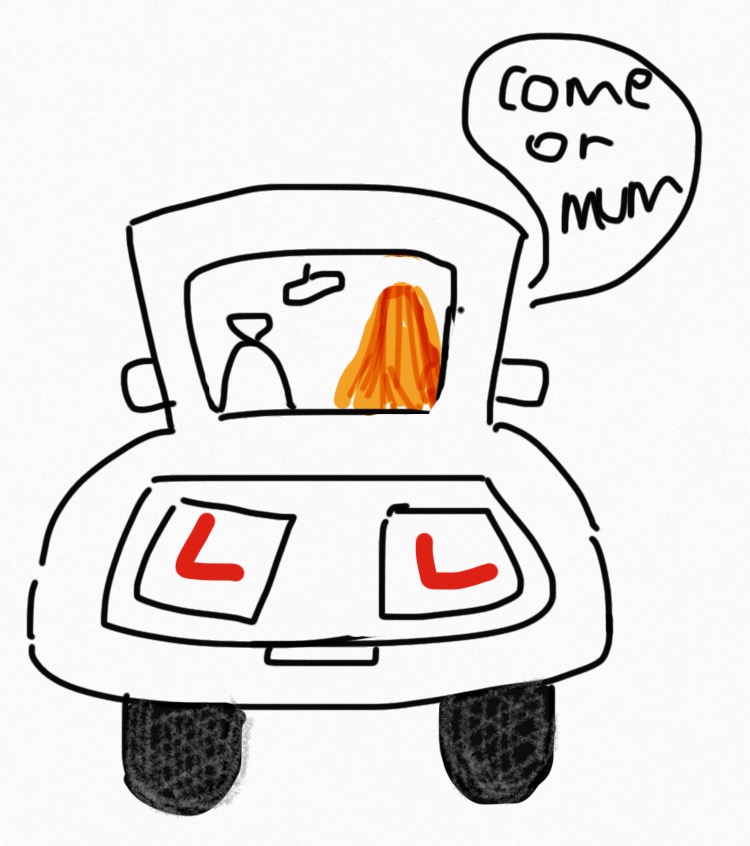 With the recent purchase of her own car, she’s keen to be out as much as possible practicing’.

Pippy, 17 learning to drive told reporters: ‘From the minute I turned the key in the ignition she started, she kept shouting hysterically for me slow down.

When I complained to her she just kept telling me to be quiet and concentrate on the road ahead.

I hadn’t even left the driveway at this point!

Even more annoyingly she kept slamming her foot down on an imaginary brake all the time’ she added.

Winching at the memory, Mummy Buck a former 80’s chick defended her actions: ‘It’s not that she’s a bad driver, it’s just me, my nerves.  Sat in the passenger side everything seems, well you know, so, umm, so, different.

I mean who knew 30mph was so fast!  When we hit the road it felt like we are thundering along at 100mph. 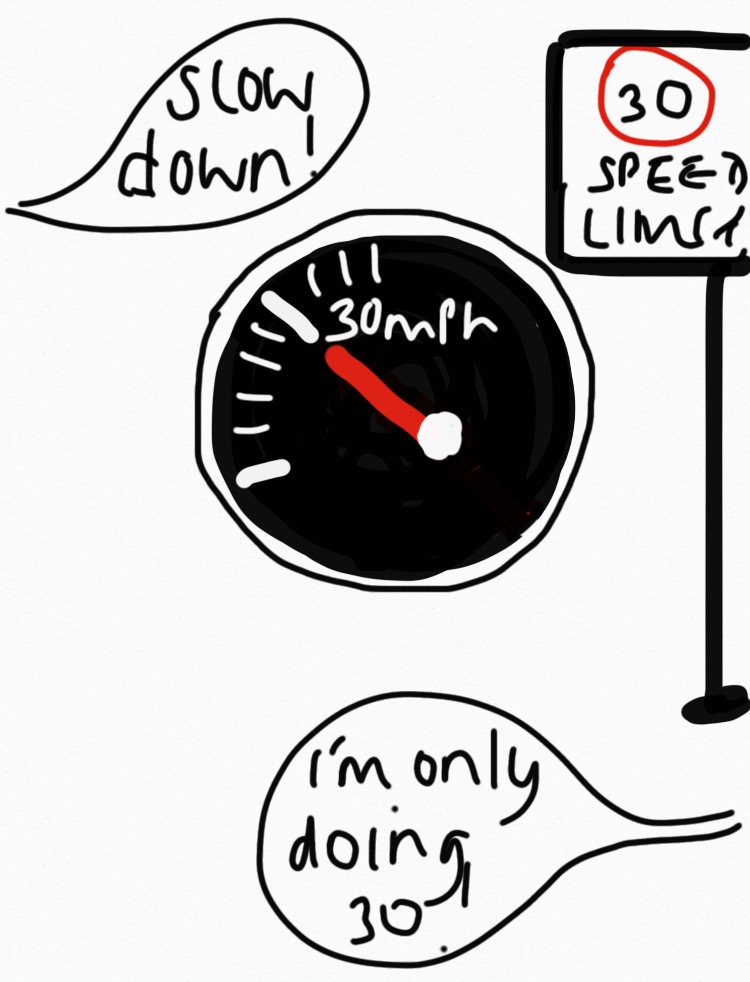 As soon as we left the comfort of the driveway, I knew my nerves wouldn’t stand it.

The cheeks of my arse began to clench, I couldn’t relax.    I looked to my right all I could see was my little girl sat holding the steering wheel, not a 17-year-old!

To top it all, Daddy Buck, Chelsea FC’s No. 1 fan was waving from the window with a look that said, ‘thank fuck it’s your turn’!

And that look is from a man who had an endoscopy without any anesthetic!

I tried hard to keep calm.  I took lots of deep long breaths.  To be honest, I’d have reached for a brown paper bag only I didn’t want to take my eyes off the road ahead’ recalled Mummy Buck, a former 80’s chick.

Witness and local resident Mrs. Pry Ying, age unknown said: ‘I was stood at my front door chatting to a neighbour when a car passed by.

Due to the slow speed, I was able to see as it trickled by the terrified face of Mummy Buck, a former 80’s chick.

Her eyes were wide and completely transfixed on the road ahead.

I remember remarking to my neighbour how she looked like that man, you know the one who was trying to smash a door down in that movie with an axe?  She disagreed, she thought: ‘she looked more like the woman who was on the other side of the door!

Legging it to my front gate I made it just in time to see a woman, I know to be Mummy Buck jump out the passenger side of a car. 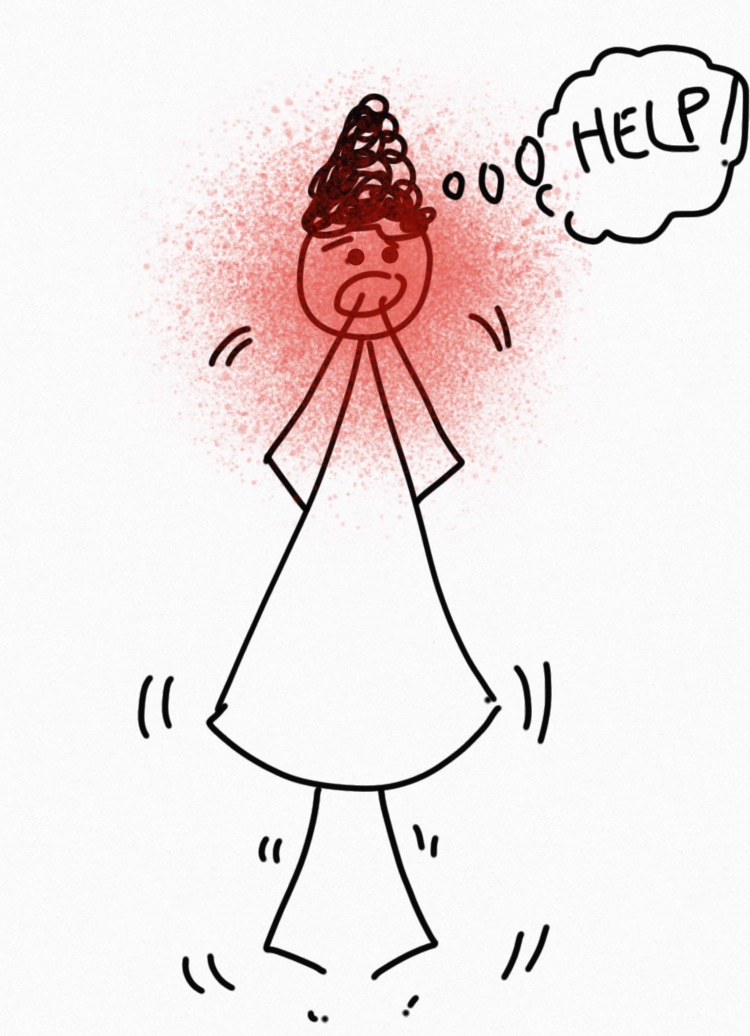 I watched as she tried to steady herself, her legs seemed to just give way underneath her.

Pulling herself up she made her way round to the driver’s side and jumped in’ she said.

‘Approaching the main road, the busier than normal main road, my nerves couldn’t take it anymore.  I panicked yelling at Pippy to pull over’ said Mummy Buck, a former 80’s chick.

I needed to be in the driver’s seat with my hands firmly on the wheel’.

IT COMES AT A COST

Mr. Kalm editor of Are you supervising your kid driving? Well, Shit Yourself No More in 10 easy steps said: ‘The fear is real.  Young drivers are too talkative, too relaxed and their confidence levels practically outweigh their ability.

It takes time to become experienced.  Teenagers these days are unprepared to wait.  They want things instantly. 5 lessons in and hey, they believe they have earnt the ‘fully fledged driver’ badge.

What we do here is prepare parents, give them the tools they need to be calm and relaxed in the passenger seat all in only 10 easy steps.

The first 5 are free, the remaining must have 5 are at a cost, but believe me it’s well worth it.  Without these final five steps, it won’t work.

BLUE IS THE COLOUR

Daddy Buck, Chelsea FC’s No. 1 fan told our reporter: ‘Mummy Buck is a bad passenger at the best of times.

She’s a bloody nightmare.  She sits in the passenger seat continually telling me how to drive!  You gotta believe it, and I’ve 9 years more experience than her.

Not content with just that, she even tells me where and how to park.  And dare I park any more than 2 feet from a shop entrance!

She’s enough to put anyone of driving.

The best thing for Pippy, 17 learning to drive is not to have her mother sat beside her’.

Pippy 17, learning to drive concluded: ‘it’s not put me off driving, in fact, I’m more determined than ever.  I feel good and with my test looming I’m feeling confident’.

We are happy to report that since this interview Mummy Buck has braved the passenger seat again and so far, her nerves are holding out well.