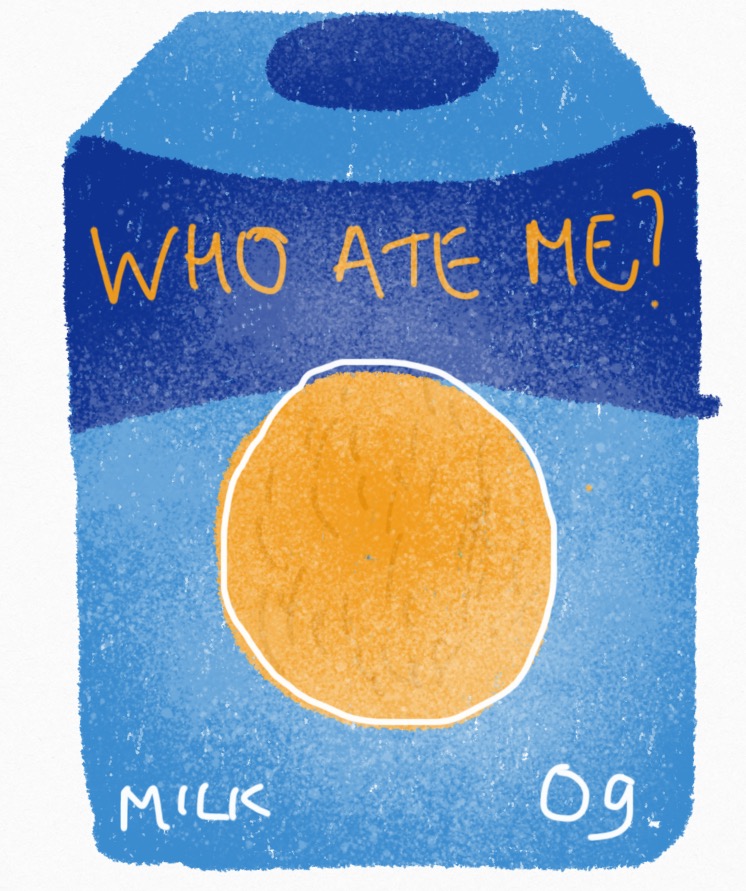 As the hunt continues for a missing chocolate orange, more details have emerged this morning about its last whereabouts.

Dip Junior 12, has vowed he will find the person who took his chocolate orange.  Reeling from the shock of it’s disappearance he told the Daily Grief: “If Mummy Buck had just got my drink when I first asked her this would never have happened.   It was bad enough I had to interrupt an important game and to get my own drink”!

He recalled: “The strain on my well-rested leg muscles tired me out.  I decided to treat myself to a chocolate segment from my chocolate orange.

As I reached into my Christmas sack crammed with an array sweets and chocolates – I instantly felt something wasn’t right”.

Sources close to the family all in residence at the time,  told reporters how the colour drained from Mummy Buck a former 80’s chick face when she heard Dip Junior cry out “Mum, I can’t find my chocolate orange, have you seen it”?

Dip Junior 12, usually plagued with poor eyesight,  regularly unable to spot his school uniform in front of his eyes and blind to anything further than his nose, immediately spotted a chocolate orange was missing from his enviable collection. 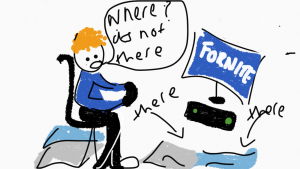 The house suddenly filled up with the sound of revenge, as Dip Junior 12 vowed to hunt down the person who snuck into his room and stole his chocolate orange.

Mummy Buck, a former 80’s chick, first on the scene denied all knowledge of taking it.  She explained in unnecessary detail how she was unaware of him having any chocolate orange.

She told reporters:  “I can assure you, it wasn’t me.  I had no idea where he kept his supply.  I mean who could or would want to eat a box of orange, creamy chocolate deliciousness!

Hearing this Dippy, 17 chipped in: “Odd, because you bought us one each one for Christmas.

Let’s not forget it was you who told us to keep them in our Christmas sacks”!

The sound of drawers opening and closing could be heard.  As the search continued, Pippy 19 believed she heard Mummy Buck even open a bedroom window in her search!

Neighbour, Isla Findit who runs the local Metal Detector club told reporters: “I was getting out my car when I saw something fall out of Mummy Buck, a former 80’s chick bedroom window.  It was odd as there was no sign of anyone at the window.

Looking over I saw something glitter on the lawn.  Walking over I bent down and picked up a crumpled box that had orange paper sticking out.  I knocked on the door.

As the door opened, a flushed looking Mummy Buck peeped out.  As I reached out to hand her the box I’d found, she hurriedly pushed it back to me whispering could I get rid of it in my bin. With that, she shut the door. 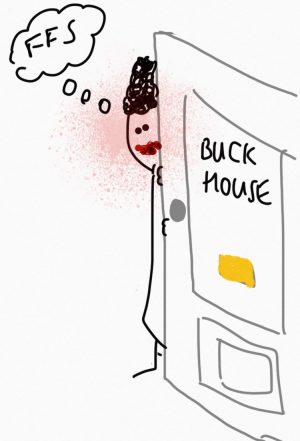 Not thinking much of it, I agreed.   Looking back, I did think it odd how she had changed her trademark pink lipstick to an unflattering shade of chocolate brown.

Chocolate hoarder and sharer of none Pippy 19, told reporters how she was in her bedroom enjoying Netflix when she heard an almighty commotion downstairs.

The shouts were deafening, Mum was shouting “it wasn’t me, why would I take your chocolate”?.  Her answer immediately raised suspicion with me.  I’ve heard this line of defence before, only to discover she’s ‘accidentally’ eaten one of my chocolates.

It’s always the same tagline, “Oh was it yours? Sorry, I thought it was mine”!

Ringing down to find out what was going on.  A very annoyed Dip Junior 12, told Pippy, 19 his chocolate orange was missing.

Thank God for the Pound Shop

Finding Mummy Buck a former 80’s chick in her kitchen searching the cupboards’ she said: ‘I have a few ideas and while none have lead to finding the chocolate orange.  I am confident it will turn up whilst they are all at school tomorrow. 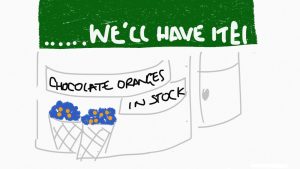 The Daily Grief is pleased to report since publication, the missing chocolate orange has been found.

It was discovered by Mummy Buck underneath Dip Junior 12’s bed.  Dip Junior is said to be delighted.