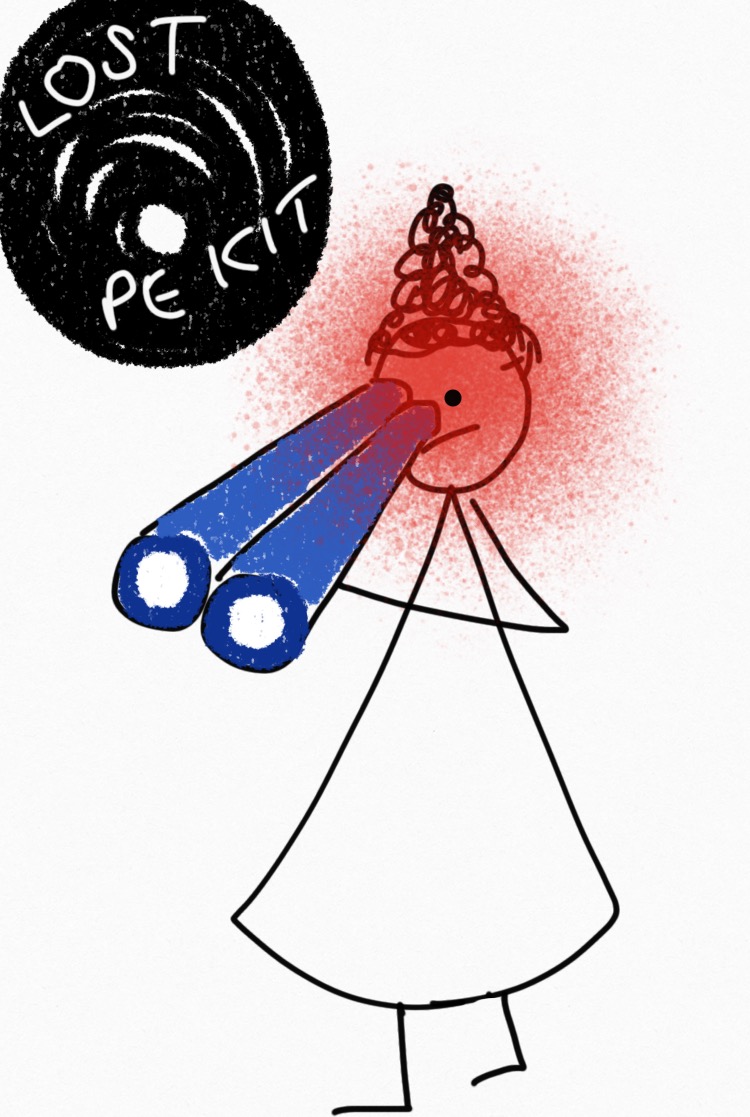 The unnamed TEENAGE BOY is at a total loss and cannot understand how his PE Bag just keeps disappearing, his mum revealed today.

The unnamed 15-year-old boy, and through no fault of his own has once again lost his PE Bag.   The PE Bag complete with school shoes, trousers, shirt, tie and another brand new, overpriced PE Kit remained missing as night fell yesterday.

The teenage boy recalls how he remembers placing the bag on the floor, a short while after arriving.  That’s the last time he remembers giving any thought to it.   Seemingly, he became distracted through his friend chatting to him and comparing abbs.  It remains unclear at this point whether he had his bag on him.

A source close to the family said “it’s not the first time it’s happened.  He’s always losing something.  Only yesterday he had to be sent back into school to retrieve his school bag he had  ‘forgotten’ to pick up.  There’s a missing something nearly every term.  Naturally, its never his fault” the source told us.

It only came to light the bag was missing when his mum upon checking his timetable saw he had PE and went to get his PE bag for him.    Unable to find the bag, and in a last ditch attemtp, she decided to ask her son if he knew where the bag was.

Totally convinced but with absolutely no clue at all, the unnamed teen told her that his kit was ‘in the house somewhere, she just needed to look in other places’.

When ‘somewhere’ failed to turn the bag up he had a light-bulb moment.  It was coming back to him, he remembered he’d definitely left it in the car.

Not wanting to hinder the search in any way, he remained seated on his arse eating breakfast while his Mum continued the search.

With the car thoroughly checked and no bag found, the un-named teen remain shocked that, his mum who is an excellent finder-of-things, was struggling in her search.

According to sources, the boy was concerned, not with losing his bag but more that he would now have to suffer a detention as he would be without a kit.

Since starting secondary school he’s had 3 bags go missing, none of which have been his fault along with countless pairs of PE socks, pens, pencils, calculators, pencil case the list is endless.

“It’s worrying to think there is an unknown entity targeting teenage boys and taking their PE bags.  Worringly, they seem to be targeting my son’s PE bag” she said.

When asked where he’d actually looked for his PE bag he replied, “Everywhere”.

When asked where ‘everywhere’  was his Mum told us it was the space no further than his nose!

After the second day of searching, Mr. R. U. Kidding returned to the last place his son remembered throwing it.  Sadly to no avail.

“On that fateful day, I’m afraid that my bloody crystal ball had failed to work,” said Mrs. R. U. Kidding “otherwise I would have ‘seen’ a message to double check he had it when he got in the car”.

She recalled: “He was waiting for me at the bus stop, as he couldn’t be bothered to walk.  It’s not an excuse, but as I pulled into the bus stop a bloody bus appeared from nowhere wanting to pull into where I had just parked.

Panicked, I shouted at him to move his arse quick into the car.  And with slow steps, he finally got in.

Rolling his eyes at this recollection, her son sighed, telling reporters: “Exactly………! she was yelling at me to hurry my arse up and get in the car.  As I got in she was literally screeching off before I’d had a chance to shut the door properly.  She should have double checked I had it on me”.

He went on: “I’m tormented daily by her repeatedly nagging me to make sure I have my bag.  Then its like an episode of Matermind, have I’ve done my homework, have I got my books ready, have I got food tech the next day”.

Already this morning she’s nagged me at least 15 times before I’ve even got out of bed.  Then again in the car on the way to school.  I have to put my earphones in to drown out her nagging”.

“I guess what I’m trying to say is she needs to chill out,  it’s not as if I do it on purpose”.

Appreciating her son’s sense of humour she laughs shaking her head.

He added” Don’t get me wrong, I do appreciate my parent’s reminders, but mornings are fraught enough finding the gel for my hair, spraying myself liberally with Lynx Africa and strolling through the house brushing my teeth.  I just about get time to catch up with all my messages.

After all, I’m not the only one who loses bags, everyone does”.

EVERYONE WHO IS NO-ONE

His mother responded, “Who’s everyone?” with no response she continued “It’s about time something was done, clearly boys aren’t losing their kits, no-sir-reeeeeee rather some unknown entity is just waltzing in and helping themselves to bags as soon as their backs are turned”.

“I even send him text messages to remind him.  They remain unread”.  I tried calling him once to remind him, he ignored it but immediately sent a text “why are you calling me?” I’m with my mates”!!!

“This is the danger when I’m not around to do his thinking for him, things go missing” she added.

Mrs. R. U. Kidding appreciates though, there are boys who are savvy enough not to turn their back on their kits, outsmarting the unseen entity.

Mrs. Knott-Mine was asked if her son ever had his kit ‘taken’ ? she said, “gosh no, he’s responsible and thinks.” she laughed.

Mr Will E. Learn scoffed “how does she put up with it? NO way would I have this!”.

Mrs. R. U. Kidding hopes this is the last time it happens.  She is, however, a realist and like all things teenage based she lives in hope ready to die in despair.

Mrs R. U. Kidding would like readers to know that fortunately her son is in no way traumatised by the loss of his bag.  He has no flashbacks or pangs of guilt. He is able to sleep soundly in his bed.  After all it’s NOT his fault.

The search for the PE bag(s) continues.

Mrs. R.U. Kidding adds: Should you come across any PE Bags which are NOT Adidas branding.  These will not be my sons.  He ‘doesn’t do’ taking any old cheap shitty bags to school!

Remember readers: If you see a woman, mid 40’s searching random places in the South East of England please don’t ignore her.  Instead, offer to lend a hand in her fruitless search.  She will be glad of the company.